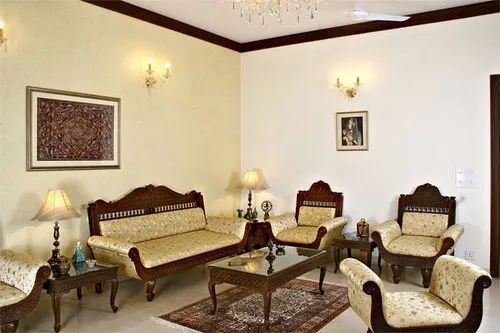 We are the leading supplier of Teak Wood Carved Sofamade available to our clients at competitive prices.call us for The Best Price

Rs 45,000  / PieceGet Best Price
Everybody seeks comfort and appearance at the same time. We manufacture a range of exquisite wooden carved sofa that reflects grandeur in appearance and lends a sense of royalty to any space that they adorn. All these products are ergonomically designed to give our customers a perfect seating comfort with great looks

Wood carving is one of the oldest arts of humankind. Wooden spears from the Middle Paleolithic, such as the Clacton Spear, show that people have engaged in utilitarian woodwork for millennia. Indeed the beginnings of the craft go so far back that, at least where timber is present, the use of wood exists as a universal in human culture as both a means to create or enhance technology and as a medium for artistry. The North American Indian carves his wooden fish-hook or his pipe stem just as the Polynesian works patterns on his paddle. The native of Guyana decorates his cavassa grater with a well-conceived scheme of incised scrolls, while the native of Loango Bay distorts his spoon with a design of figures standing up in full relief carrying a hammock.[1] Wood carving is also present in architecture.
Figure-work seems to have been universal. To carve a figure/design in wood may be not only more difficult but also less satisfactory than sculpting with marble, owing to the tendency of wood to crack, to be damaged by insects, or to suffer from changes in the atmosphere. The texture of the material, too, often proves challenging to the expression of features, especially in the classic type of youthful face. On the other hand, magnificent examples exist of the more rugged features of age: the beetling brows, the furrows and lines neutralizing the defects of the grain of the wood. In ancient work the surface may not have been of such consequence, for figures as a rule being painted[1] for protection and especially color.
It is not always realized at the present day to what extent color has even from the most ancient times been used to enhance the effect of wood-carving and sculpture. The modern colour prejudice against gold and other tints is perhaps because painted work has been vulgarized. The arrangement of a proper and harmonious scheme of colour is not the work of the house painter, but of the specially trained artist.[1]
In the early 20th century, the Encyclopædia Britannica Eleventh Edition, on which much of this entry is based, commented, "Of late years carving has gone out of fashion. The work is necessarily slow and requires substantial skill, making the works expensive. Other and cheaper methods of decoration have driven carving from its former place. Machine work has much to answer for, and the endeavor to popularize the craft by means of the village class has not always achieved its own end. The gradual disappearance of the individual artist, elbowed out as he has been, by the contractor, is fatal to the continuance of an art which can never flourish when done at so much a yard."[1]This statement has proven untrue, as the continued survival of the art and craft of woodcarving can be demonstrated by the large number of woodcarvers who have carried on or advanced the tradition in different parts of the world.

Wooden Carved Swing Furniture. ... Our swings are made from best of Teak wood, Sewan wood and they are specially made by expert and skilled artisans. These swings are completely hand carved and hand made wooden swings.

Wooden Carved Swing Furniture. ... Our swings are made from best of Teak wood, Sewan wood and they are specially made by expert and skilled artisans. These swings are completely hand carved and hand made wooden swings

A sofa bed or sofa-bed is typically a sofa or couch that underneath its seating cushions hides a ... are free to deflect under load, i.e. the total number of coils minus the number of closed coils forming the ends is a measure of the spring quality.

Rs 35,000  / PieceGet Best Price
Carving is the finest work found in furniture. This artistry allows the carving to accentuate the grain of the wood and to transition around corners while preserving the pattern. It is done one piece at a time by those who are wood carving masters

Wood carving is one of the oldest arts of humankind. Wooden spears from the Middle .... Of furniture, folding seats like the modern camp stool, and chairs with legs ... Great works of art were created in wood during the entire Middle Ages,